It has become a recurring decimal where idiots who are cursed from above use names of celebrities to dupe unsuspecting individuals of their hard earned finance.

An investigation carried out by ONN reveals that one of such idiots has an account on Facebook where he calls himself King Saheed Osupa and tells social media adherents, most especially the fans of the Fuji music star that he is dashing out free money to loyalist.

Mr Ladi, the publisher of Nigeria’s First Digital Magazine, ONN engaged the Fuji music icon in a telephone interview last night Wednesday the 24th of June, in order to unravel the veracity of such ‘Facebook philanthropy’.

According to Osupa, he was aware of such mischievous activities and would appreciate any further publicity that would make his fans know that the person parading himself as King Saheed Osupa is nothing but a fraudster wanting to reap from where he didn’t sow.

“The scammer has once been mentioned on Opera news but he is unyielding”, Saridon P told Mr Ladi Jolaosho. Unfortunately for the fraudster, little did he know that this news medium will ensure the end of his unscrupulous activities since the records are already there. 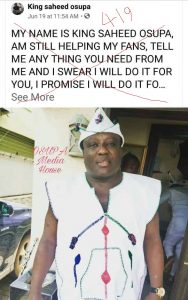 We hereby warn fans of King Dr Saheed Osupa, the Olufimo 1 to desist from transacting any been business with such individual. The guy behind the scene will soon meet his waterloo as ONN has already opened a manhunt for him in our usual fashion.