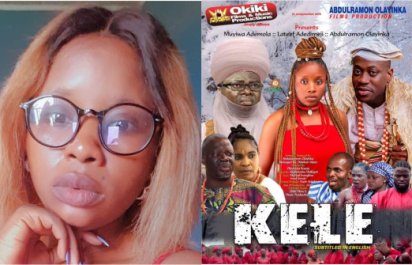 A group of disgruntled elements ganged up against the movie director of KELE, Olayiwola RAZAQ a.k.a Ojopagogo, on a flimsy excuse that story and the title KELE belongs to them, but being a matured and highly experienced industry guru, Ojopagogo orientated those who were opened to enlightenment that everyone is entitled to tell the story of any existing deities.

For instance, telling the story of SANGO has received a lot of jusice from diverse directors in the past; interestingly, God of thunder doesn’t mean anyone is solely given exclusive right or privilege to the story or title. Furthermore, any creative movie producer or director can as well tell the story of KELE,  using his own ingenuity and perspective, such person is equally free to put his name on the label, movie lovers will still watch Yinka Abdulrahman’s KELE or Ladi Jolaosho’s version.

Suffice to say here that even if ten versions of KELE is released into the movie mart same time, the audience know which one they would demands for since it’s a free market.

KELE was scheduled to be released on 9th of November, but due to the high demands, it has now been postponed to 26th of November.

KELE
Sango is one of the deities in the Yorubaland and once you are the initiated, you have nowhere to run to…KELE is a deep traditional story that is laced with rich religious beliefs…