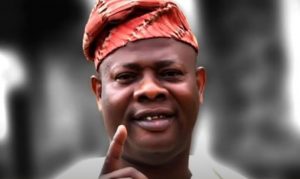 A prominent Nollywood actor, film producer and director, Yinka Quadri has asked God to intervene in the affairs of Nigeria and most especially, common man as the country undergoes one of the worst economic downturns in the history of her existence.

Speaking to ONN early in the year when many Nigerians within and outside the country were pre-occupied with the shout of praises to the creator for allowing them survive 2021 in spite of the challenges, Yinka Quadri said “I feel the pains of many Nigerians and share in their dreams and aspirations, I cannot but wish everyone a new year (2022) devoid of killings, high food prices, hopelessness, and low self esteem”

READ ALSO:  Exposed: 3 Reasons Why Pasuma was Chosen and Saheed Osupa Dumped for Lagos at 50 Celebrations

Speaking further, the multiple award winning star told the editor of ONN, Mr Ladi jolaosho that he also thanked God for His mercies over his family. “I cannot rule out the fact that we lost some of our members (actors) in the out gone year (2021), yet we cannot question the Almighty Allah for anything… He alone knows the best; He is the omnipotent and omniscience”.

When asked on what he has in stock for his fans in the new year (2021), Masoomo, as he is known and addressed in the entertainment industry said “I have more than enough for my fans, I have a Youtube Channel now and it is already gathering momentum; my fans demanded for it and they now have it. It’s YINKA QUADRI TV”.

Yinka Quadri said most of his award winning films is like 150 MILLION, EDUNJOBI, ORO LEYE NGBO, KADARA MI, IRUNMU LOWO etc. are already being watched freely on his Youtube channel, while others like ABULE SOWO are coming shortly. He enjoined those who are yet to subscribe to do so as it is free to subscribe to his Youtube Channel.

A group of disgruntled elements ganged up against the movie director of KELE, Olayiwola RAZAQ …